The Story Behind the Perfumed Cutlass Hunt 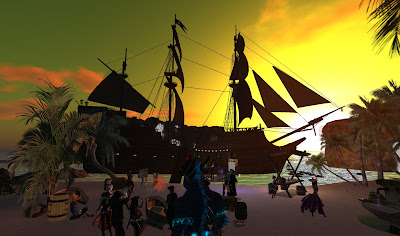 This is the story behind the hunt:

Leaning against the rail of her ship, Priscilla Claymore, better known as The Perfumed Cutlass, watched the sun blaze across the water in brilliant ripples of molten gold as it sunk beneath the waves. Night was her favorite time on the sea, well one of her favorite times. She loved to look up and see the stars shining in the sky like diamonds sewn into the skirt black velvet gown. The twinkling sparks of light swirling through the dark reminded her of the giddiness she had experienced long ago as she spun from the arms of one paramour to another dancing through their hearts and into their dreams.

Seven bells rung on deck pulling her out of her daydreams and reminding her there was work to do. She glanced to her first mate busy making final preparations for tonight's voyage. They would be visiting her treasure cave, most possibly for the last time. She gripped the rail and looked at her hand, tanned and still strong, but so much more wrinkled then it seemed it ought to be. "Ah well," she thought "age might come before beauty but at least I am still at the head of the line." 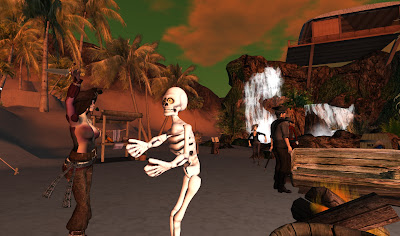 She smiled as gathered what she needed from her cabin. It was time to finish and make sure her men were settled. She had thought the decision to retired would be a hard one, impossible actually, but in the end it had simply happened. Her priorities had changed. Where once she had reveled in discovering the unknown, she now longed to share all that she had found with the people she loved. It would surely be a change, but perhaps still an adventure, just not with quite so much bloodshed. Well, in reality there hadn't been a lot of bloodshed. She was much more a lover then a fighter, but still there had been ample sword play.

Laughing quietly she joined her crew in the longboat and they put out for shore. Visiting the cave always made her reminisce and she lapsed into memories as the rhythm of the oars in the water  played in the background. She remembered all the pieces of her map she had left behind, all the loves she would return to see... 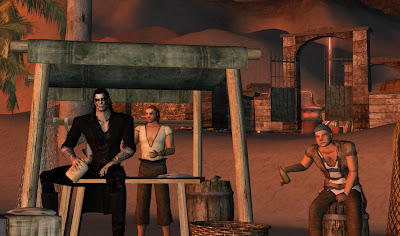 The first mate watched his captain lay back, resting against the side of the boat. Her breath was shallow and her eyes seemed focused somewhere far away. He knew she wouldn't last long but he hoped they could get her to the cave before eight bells sounded. All the arrangements were made. He knew exactly what to do about taking care of the men and the ship. He also had 15 letters to deliver. 15 people to bring together. It was her final wish. For the people that she loved to share one last adventure with her. To bring together the pieces of the map and find this place, her final resting place, and share in the bounty of her life. A richness they had all contributed to in so many ways. He knew no one would remember The Perfumed Cutlass for her epic battles, back alley deceit or unashamed ruthlessness. History might not make much note of her at all, but she had followed a life of her own making. "And perhaps," he thought, "in the end that was all that mattered."

Do you want to know how it ends? That is up to you! Follow the hunt and help her! 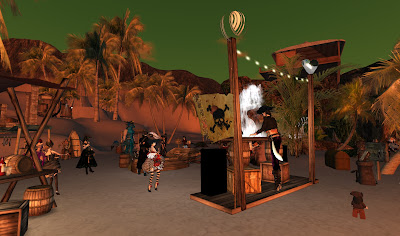 The photos has been taken at the opening party yesterday.

Here you find all you need to know abou the hunt: http://madpea.blogspot.de/2012/09/perfumed-cutlass-hunt-how-to-start.html