An awesome concept such as UNIA, can only be realized by awesome teams. Teams such as MadPea and its family of collaborators, who have also become a great part of its creation and concept. UNIA is like a painting that is brought to life, through a vision, creativity, and art.
Bryn Oh and Caer Balogh, two amazing people who have taken part in the making of UNIA share that world with us today.

Bryn Oh was able to give us insight about UNIA, herself and dear friend Caer Balogh.

Who are you and what do you do on second life?

"My name is Bryn Oh and I create virtual art in the form of Immersive environments."

You can read more about Bryn Oh, using the link below to her blog:


http://brynoh.blogspot.com/
Can you give me a little insight of who Caer is, and her art?
"I think Caer is some kind of super program pretending to be a human behind an avatar. Either that or she is an alien who survived the Roswell crash and is in a bubble in area 51. I think that explains it and they have allowed her use of Second Life to alleviate her bubble boredom. Or she is just a really cool person. Her art is scripting which is essentially the magic in SL."

What is it, that you and Caer do, in the development of the UNIA game?


"Well this was the first time I have ever closely worked with anyone and it was a real pleasure. I am not a very good scripter. I admit it! I suck. My brain doesn't work that way. Caer is a master scripter so the difference for me was how I approached what I wanted the build to do. So for example Caer would say.. "Ok so what do you want the build or this scene to do?" What that means to me generally is "What would you like it to do knowing the limitations of SL?.. so be reasonable". But she didn't want me to temper my goals because I don't expect much from SL scripting. So I would tell her what I wanted in a perfect world and she would make it happen if possible." 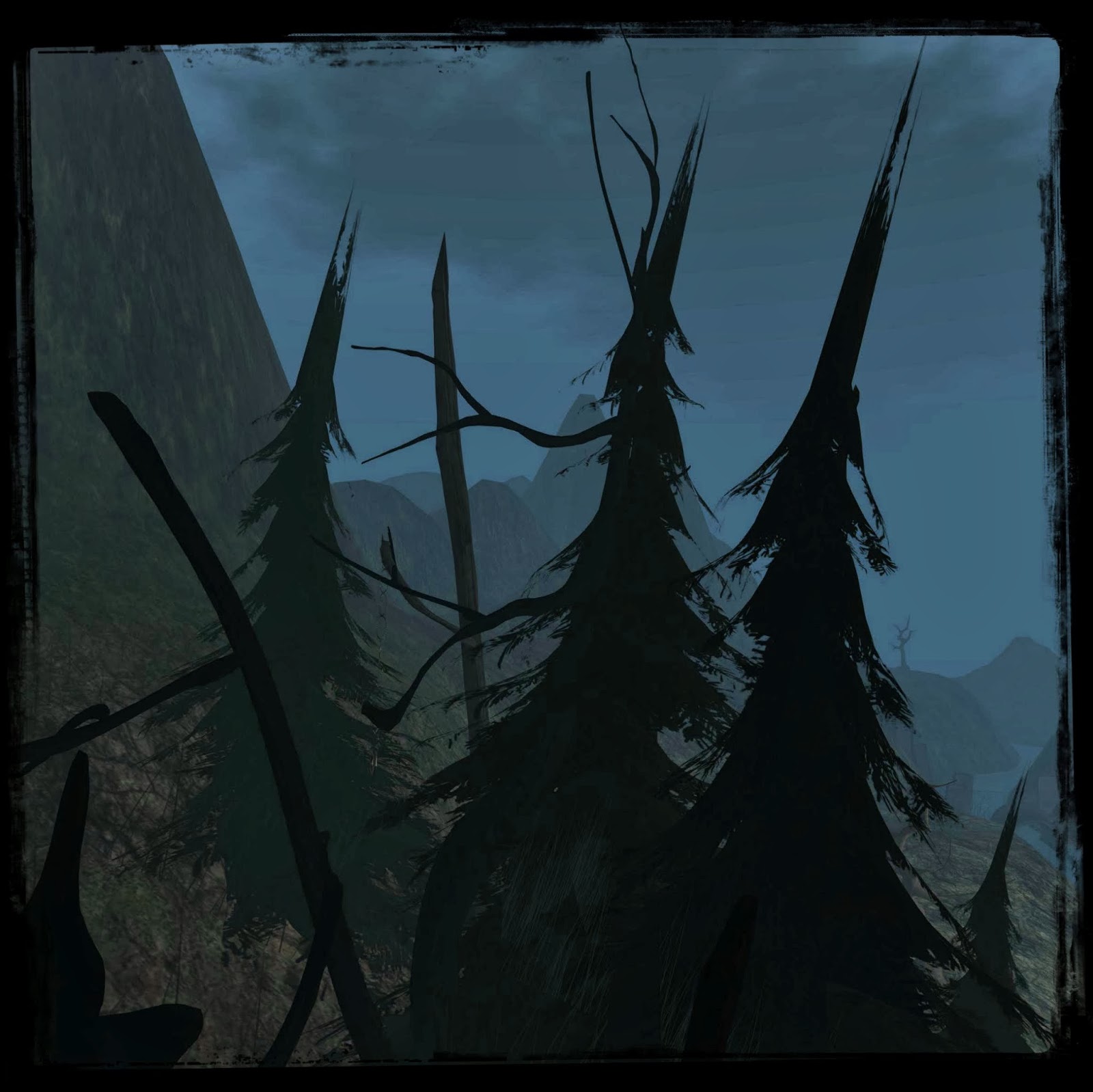 What do you enjoy about second life?

"The ability to create. A world of user generated content is very alluring to me, from novice to pro."

How would you describe your art style?

"I create immersive narratives that are often melancholy in nature and done in poems. Most of the things I create are a type of introspective diary." 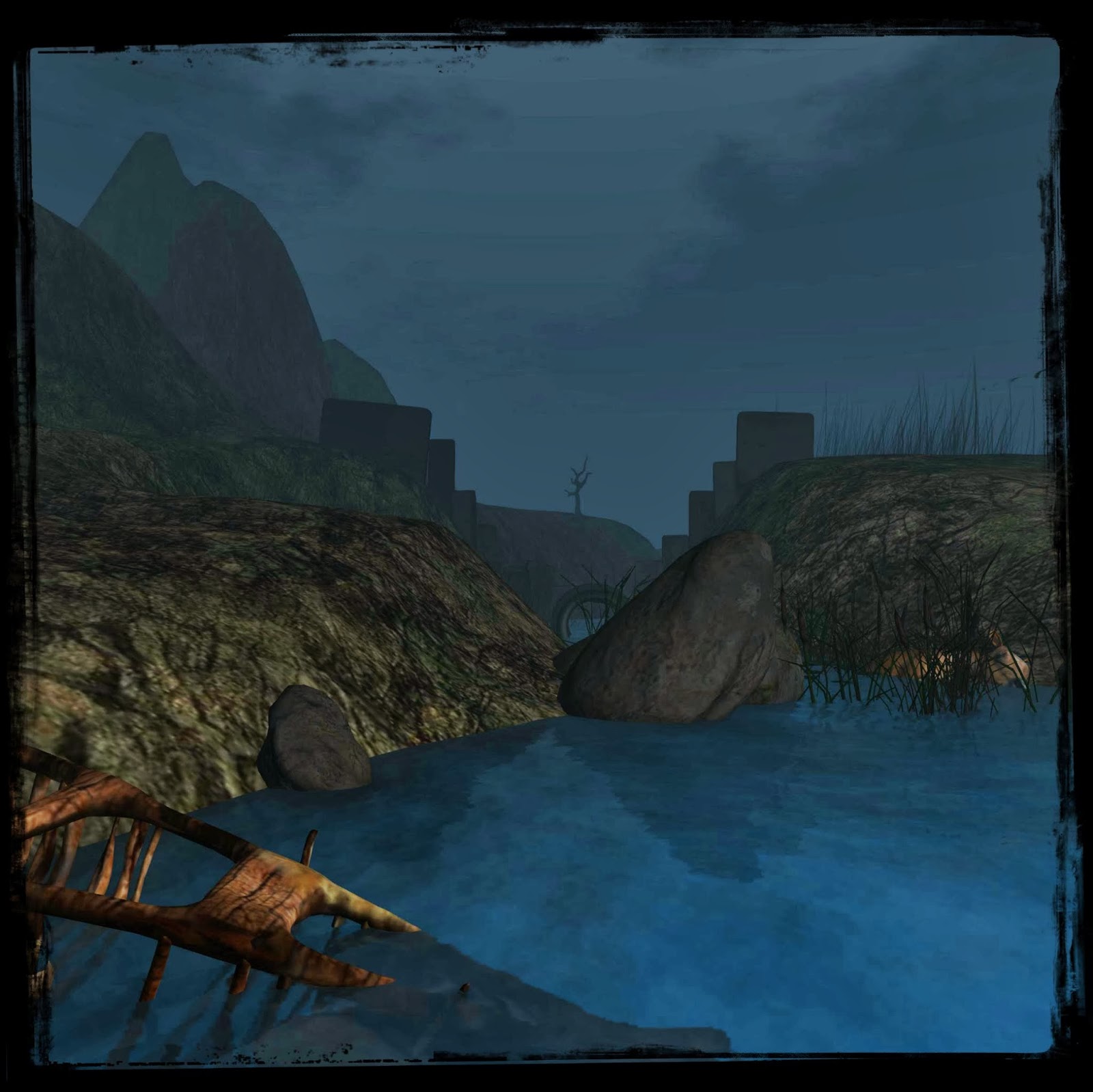 What kind of art/or theme is your favorite and you most identify with?

"I am fond of Brunaille or Grisaille painting styles, which limit the colour palette to create harmony. Artists like Georges de LaTour were masters in this area. I enjoy crosshatch pen and ink drawings from old masters like George Cruikshank or John Tenniel to that which include washes like Alberto Giacometti. In SL I tend to gravitate towards artists like AM Radio, Nessuno Myoo and Rose Borchovski. I am also quite fond of Mikati Slade and her six bit candy art. Glyph Graves always impresses me with his conceptual work as well as Blotto Epsilon and Cutea Benelli. Selavy Oh too. There are lots actually I could go on for a while. My themes often revolve around a dystopian world where outcasts hide but always hope to find someone to share in their solitude. They are all reflections on technology and the dehumanization of society."

Is there a particular time or anything that inspires you to do what you do on second life?

"Hmm a time no I wouldn't say so. Well I do like the Victorian era and combine it with modern technology. But mostly my inspiration comes from within. There are endless subjects to broach within the human experience itself. An artist just needs to be introspective and figure out how to portray those shapeless shifting things inside us all."

What is the reason you joined second life and when?

"I joined several years ago after reading an article about it. The article was a bit ridiculous in that they suggested a person spent $200,000 USD on a virtual condominium or something. I found that to be remarkable and felt I had to go see this building that he had purchased. After I came into the world and realized I could build things.. well I forgot to go find the Condo."

Is there one thing that you have created, that you would consider the most special to you personally and creatively?
"I think that would be my trilogy of work The Daughter of Gears, The Rabbicorn story and Standby. That was my breakthrough realization of what I felt made virtual worlds a new and unique art medium to work in. I had to be patient in order to release a portion for IBM once a year. It is also special to me because it was work which I used to show the Canadian government who then awarded me a new media grant to pursue my art here. The 3D builds don't exist in world anymore but if anyone would like to see the machinima movie, which is long at 38 minutes, here it is:

Other than that it would be Anna's Many Murders,

Imogen and the Pigeons,

and Juniper
How would you describe UNIA to others?

"Unia is a HUD based adventure built by some of second life's most creative people."

"Yes I do. I would never put out something I don't like. I work at my art until I feel it is something I think is good, if it never reaches that level then I shelf it to be revisited a month or two into the future. Some things I never put out." 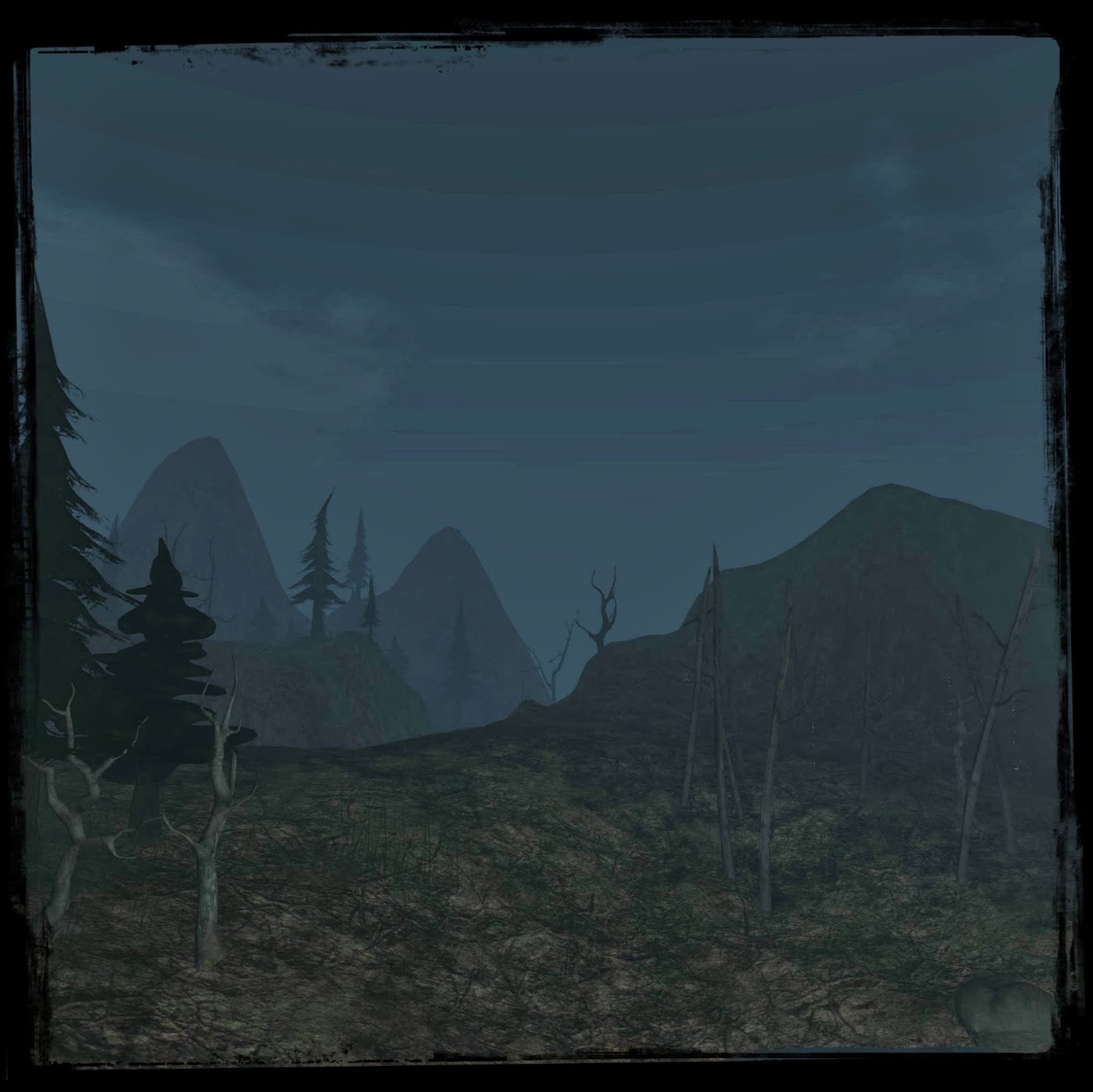 Which artist has inspired you to do the things that you have on second life in the creative realm?
"I think perhaps Bansky. He is an anonymous graffiti artist from England who inspired me in that we didn't know who he was at the time, what he looked like or even gender. There is a very natural ego an artist possesses which is to prove to family and friends they are successful. That they made the right decision to follow the rather lonely and financially suspect path in being an artist. Our society judges success by salaries, cottages in the country, holidays and second cars. Many artists know from the start that those things will not be part of their life. For example contrary to what some believe Vincent Van Gogh was not a particularly successful artist in his time. He sold a single painting (to his brother Theo) and lived in poverty until he killed himself. He is celebrated now, and he was excited with his discoveries, yet he must also have been terribly unsure if he was merely a hobo masquerading as an artist. He never found out. So seeing Banksy create art with that type of confidence inspired me to create work for the sake of creating art knowing it would not directly benefit me in rl.  So it is interesting to me to see how that affects your choices."

In UNIA, what is your dream scene that you have created based on?

"It is called the Drowning of sister Sarah."

When was your first interaction or encounter with MadPea?

"I used to do a top ten favorite builds each year and make machinima for my favorites. I came across Madpea in 2009 for a story they made called Swamp Hotel. I have a post if anyone wants to see it.. and a tiny crappy machinima of it too."

Did you ever partake in any of the MadPea games or hunts? If so, which one?

"Yes! I was actually in one a while back called The Lost Treasure of the Inca Warrior."

Is there anything you would like to say to the Peas and the MadPea Crew?

"Yes, please don't judge me by my nightmare scene.. I am not a complete lunatic... 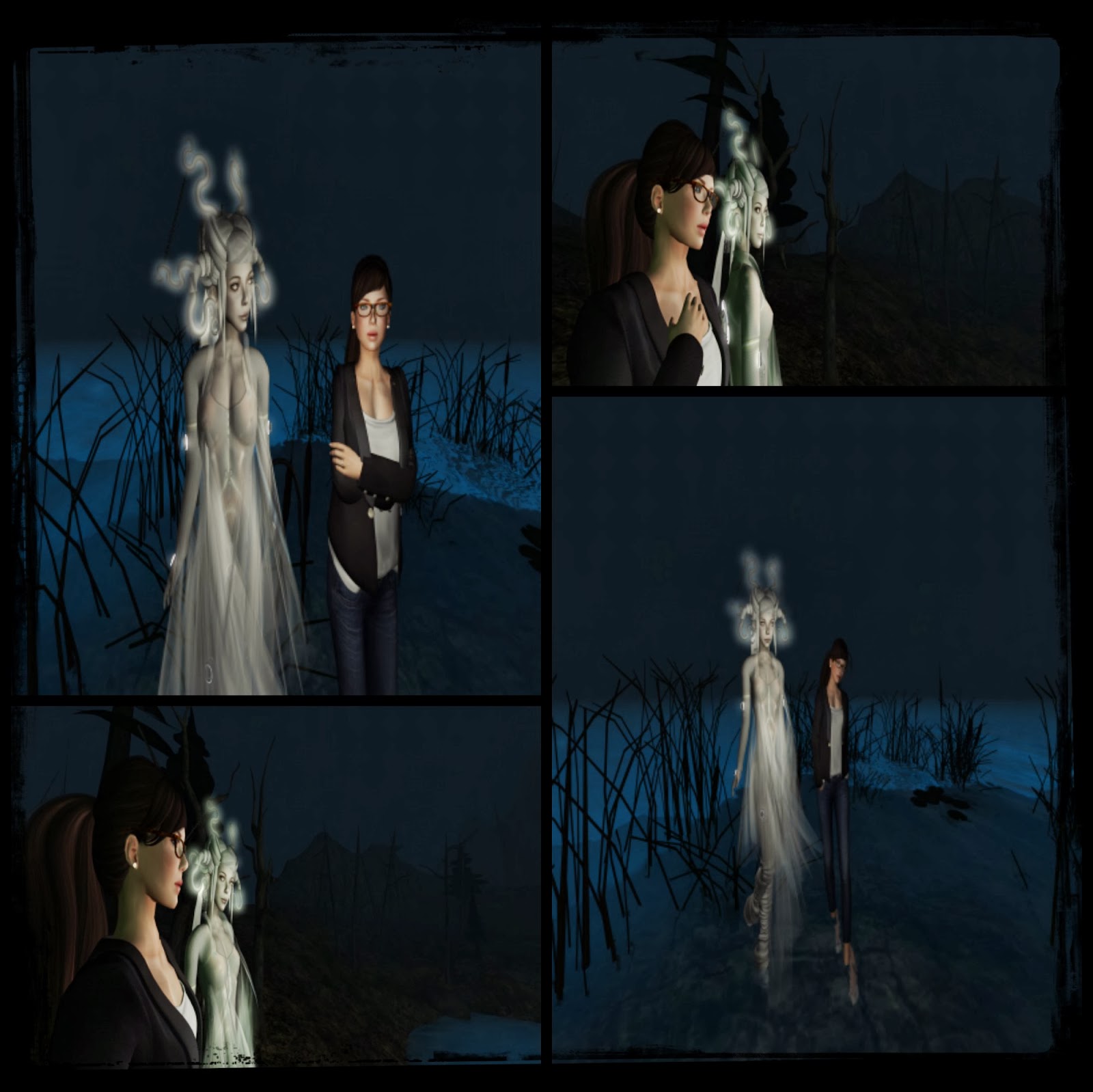 Thank you for this interview Caer Balogh & Bryn Oh! 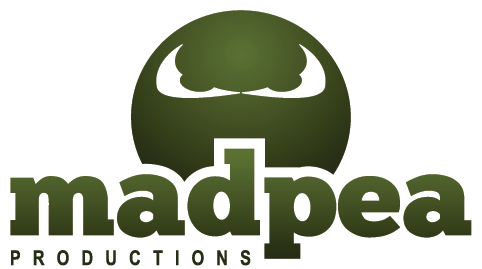