MadPea has a really international team. One of the newer members is the Japanese builder and artist Yooma Mayo. Yooma became well known in Second Life with his huge installations on full sims. Technical parts of metal turn from looking far to poetic nature sceneries.


Yooma is RL in web engineering. But he was artist too: “ I've made some objects in RL before. I used mixed material. paper, wood, steel, glass. Sometimes I even used living wood. My RL creations stopped 10 years ago. Not only because of time limitations. My works has been so large and did not fit into my house. Thus, I mainly came to SL to create. The idea of user created content fascinated me and I think, prims are just another, new material.”

Yooma Mayo does not create only large objects in SL. In his main shop on the beautiful Kowloon sim he sells avatars and many playful items, mostly made of metal parts. His first product was a tiny avatar and that gave the shop his name: Yooma Guijin Dou. Dou means shop and Guijin is a word creation by him: Gui means fake and Jin is human, so Guijin is fake-human = avatar! The name of the shop is translated 'Yooma's Avatar Shop'. 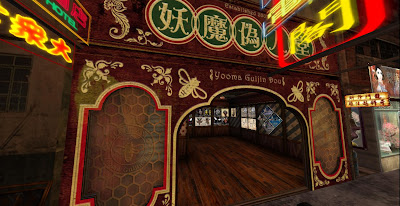 Yooma likes rusted factory & mechanics. That's why he is the right person for building a creepy, rusted roller-coaster and rails for MadPea's Carneval. Yooma made a draft of the whole build and is now finishing it. He said: “I love roller-coaster and evil things :)” We are not allowed to reveal too much, but here is a sneak peek:

It will be great and eeeevillll!