The Very Last Artwork of Claudia222 Jewell @ Madpea Base

As you may have heard big changes are happening at MadPea. Sanity Falls, MadPea’s most famous hunt of all times with more than 3.000 players is ending June 30th. Starting with July 1st all Madpea sims will close for a major reconstruction. Kaaos, Reaction, Storybook and the store will be still accessible, just moved around. Show and Tell will pause for one week and then be held again regularly.  So, what will be come instead? MadPea head Kiana Writer has huge plans. Besides the construction of the biggest Madpea game ever, Madpea Base is going to have a complete new face. The MadPea team is more than happy, that Kiana Writer won Claudia222 Jewell for the central build.

Claudia222 is one of the stars in the Second Life art scene, although she is relatively new as artist. When she joined Second Life about five years ago, she got a TP to a free sex sim before she even knew how to move in SL. She could not find an exit and logged out frustrated, thinking that this was SL. More than two years later she tried again to join SL after an invitation by friends who told hear about 3D building. This time she began to do that, what her main interest was and still is. 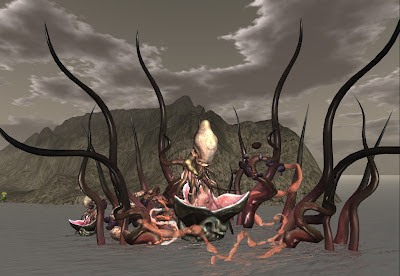 The statues of Claudia222 are very much different from those of other builders in SL. They look lively, organic, if not to say erotic. “Since childhood I loved to design and paint and anatomy always was my main interest.”, explains Claudia222. “I need them lively because the base of all life is organic. That’s why I always add moving parts to my statues.” Many of her statues are goddesses. Claudia:  “I am not related to any religion, I am referring with my works to prehistoric religions where the people believed in nature and sacrificial gifts to the gods to change the world.” Her latest work was her installation “Spirits”, homage to Hieronymus Bosch.  I f you haven’t seen yet, you should not miss it. 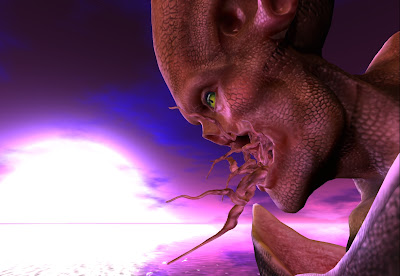 It was shock for us to hear that Claudia222 Jewell stops creating art in SL. Of course we asked for the reasons: “I am disappointed that mesh is no longer being developed in Second Life. All projects as normal map support and free bones have been stopped. I have to look out for other options to learn more about building. I will now concentrate on the creation of avatars. And yes, also in SL.” 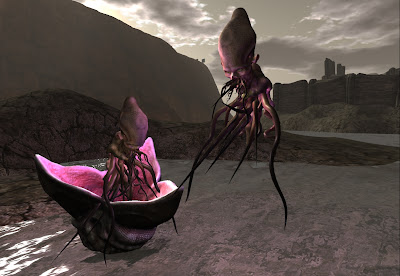 Claudia placed yesterday her last and for sure creepiest artwork on Madpea base: Cthulhu and his helpers. It bases on the most popular short story "The call of Cthulhu" by H.P. Lovecraft The story caused a complete mythos. Millions of years a go he came to earth with his entourage Cthulhu is described as being "...an octopus, a dragon, and a human caricature.... The imprisoned Cthulhu is apparently the source of constant anxiety for mankind at subconscious level, and also the subject of worship by a number of religions. The short story asserts the premise that, while currently trapped, the Cthulhu will eventually return... 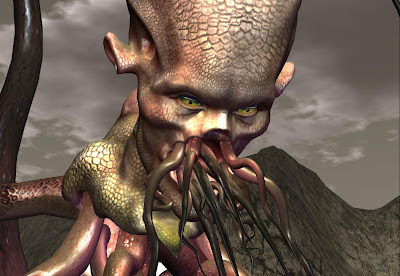 Now he returned to Second Life and we look forward to a horrible, creepy and spooky MadPea Base!

Come and see before the sim closes on Sunday:  http://maps.secondlife.com/secondlife/MadPea%20Base/26/50/24