Come For Building Fun With PRIMTIONARY!

Every Saturday quiz- and building friends are coming to MadPea for Primtionary. Don't miss that fun! 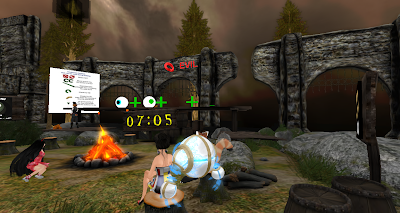 Running for over 6 years straight, Primtionary is one of the most - if the not THE most - popular group game in Second Life.  An experience truly unique to the virtual world, Primtionary is the modern Pictionary: One person gets up on stage and builds a secret word given to him or her by the host, while everyone in the audience tries to figure out what the word is.  The first player to get the word wins a token prize money (25L per word) and, more importantly, the privilege of building the next word. 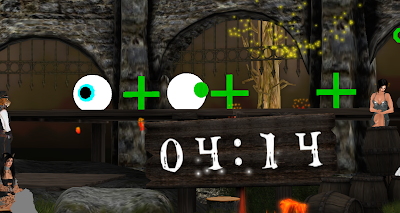 How to play?
The game consists of one player "building a word". Think of what level you can build at: Easy, Medium, Hard, Evil or Impossible. Tell the host in chat what level you want.  They will give you a word in Instant Message for you to build at that level.  The first person that guesses the correct word wins that round and 25 Lindens, and is entitled to build on the next round. Please remove all of your build  off the stage.

You are not allowed to spell the word out or even part of the word.  You can use letters for the build but not if the letter is in the word.  Custom textures and colors for prims are allowed.  No textures are allowed that are the word.  As in "mural", you can't put a mural texture on the prim.  It does need to be built on stage, so you cannot pull something out of your inventory.  What is allowed is building green "CC" prims to represent "SOUNDS LIKE". The CC is a symbolic ear and that is why it is used for "SOUNDS LIKE". You can also use a green "+" if you need to break down the word into syllables.  You can use a green arrow to point at what you want the audience to see or say.  No scripts are to be used in the build, and no sculpties are allowed.

Come to MadPea at 2 PM SLT!