The MadPea team has many cool members, who are always good for some fun. Among them Arduenn Schwartzman, who is packed with crazy ideas. Many of them can be found near his WarBug Store. While visiting his shop – of course – we started talking about his famous WarBugs. 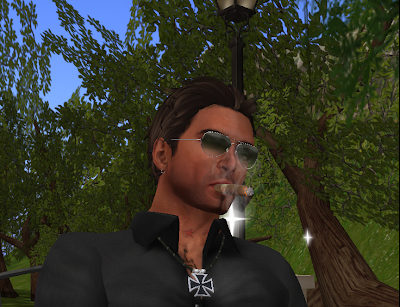 Quan Lavender: WarBug is a long running success obviously. How got you the idea?

Arduenn Schwartzman: I got inspired by several things. The idea of having a dogfight combat sim was lingering in my mind years before the WarBugs already. For starters: Of all computer games that have ever existed, I have enjoyed flight simulators the most. I already played 'Fighter Pilot', an F-15 simulator on the Sinclair ZX Spectrum, in the 80s when I was in high school. In SL, I had a vision about having a few sims with two airports for competing.

Quan Lavender: That sounds good; flying from sim to sim...

Arduenn Schwartzman: Actually, crossing sims has always been a problem in SL. Especially with fast-moving objects. So that's why I had the idea of making smaller and slower planes--Not necessarily for tinies or micros, but also normally sized avatars. They would just have to squeeze their arms and legs together to fit in. That's how the WarBugs were born. I made then fly slower so a single sim would be more than enough for dogfights. And it seems to work quite well, ;) Yet, WarBugs still seem the most popular among tinies. I was also inspired by the Wallace and Gromit movies of course! There's one famous scene where the motorcycle sidecar that carries the dog Gromit detaches and turns into a little airplane. (Spitting image of a WarBug!)

Quan Lavender: To use the WarBugs, people need to rez, right?

Arduenn Schwartzman: Well, there's two kinds of WarBugs... Private WarBugs that can only be piloted by their owners, and need to be rezzed on a land by them. So, on no-rez area's there's no way, unless you rez it somewhere else and fly to that land... But the other kind of WarBug rezzes from a rezzer placed there by the land owner. Moreover, those planes are accessible by anyone. And the rezzers keep the combat scores and relay them to http://warbug.net .

Quan Lavender: Your shop has so much more to offer, many fun items.

Arduenn Schwartzman: The best selling item in my shop is the tummy talker! I have so many bad reviews for that! *Laughs* Mine's the only one that makes nasty gurgling sounds. I even quote the bad reviews in the marketplace picture. It is bought very frequently by people who actually hate tummy talkers too. They wear them in protest. Personally, I find it a bit weird, talking tummies, and people talking to prim babies and change diapers while that's actually the worst thing about babies IRL. I sell a prim baby in a jar of formaldehyde. Its diaper never needs to be changed and it only cost L$1! Here lemme show you my little shop of sexually transmittable diseases and abortions.

Quan Lavender: I am not sure if I want to see it ;)

Arduenn Schwartzman:  It's quite decent. I try to keep things Moderate here. Here, for instance, is a Bratwurst on a stick, to carry around. You see: I make a lot of items that enrich SL greatly! I have a nice disease here too: herpes! My noob avatar ('The Lady's Man') is a disease too ofcourse. It's surprisingly popular on MP, even though it's the standard horribly-looking n00b avatar with cheap jeans, freebie hair, very wrong body shape and some special 'attachment'. I think I'm partially responsible now for n00bs looking very bad in SL. Finally, there are dozens of other gadgets, such as an electric pink kitten guitar, wearable rain clouds, assorted wearable furniture and, of course, fart gadgets. Fart pranks are not my favority type of humor, but they sell damn well in SL!

Quan Lavender: I see, these items are necessarily needed for a proper life in SL. And your prices are really cheap!

Arduenn Schwartzman: To be honest, I've always been stupid about money. And the terrorist griefer in me dictates that, in order to undermine SL economy, I have so tell all this stuff at ridiculously low prices. But the sheer size of the SL market makes that impossible of course, so the only one affected by this is me :) But I make enough to pay the parcel rent, so why increase the prices? L$10 is a nice and magical number to sell things at. (Yet, selling WarBugs helps pay the rent too.)

Quan Lavender: Oh wow, that is good! So, what brought you here and how came that you started creating?

Arduenn Schwartzman: Well, that famous interview with Anche Chung about six years ago was my first encounter with SL. ( http://boingboing.net/2006/12/21/second-life-griefers.html ) My reaction was: Wow, that SL thing is really cool! So I subscribed, with a couple of weblog friends and we started to terrorize the town, like a good noob would do. We'd bump into people shopping at Yadni's freebie store in wheelchairs and flashmob real life company sims. But then of course you settle down a bit and take things a bit more seriously in SL. :) ... (Sometimes) ... It actually took about a year for me to discover that building stuff in SL is fun. It was about then that I saw the full Lego potential and went crazy making fun little things for the Hobo community.

Quan Lavender: Do you have RL background for creating?

Arduenn Schwartzman: Throughout my life I've been drawing and designing a lot, even though I started a career as scientist, and do experiments in a lab with DNA and proteins and viruses and bacteria. That was kinda fun and creative too ;) I did a lot of teaching as well, which was a lot of fun. My favorite journal to publish in was The Journal of Virology (impact factor 5.5, I think). Nonetheless, as my career evolved, it became more and more a desk job. I've been cutting down with work a bit more lately though. My wife took over, partially, so I'm half housedad now, able to spend more time with drawing and designing again. My wife supports my time being spent building in SL, as long as I can cash in some L$ to do RL groceries. *laughs* SL's a great place to be creative. I've learned a lot of new things here--even HTML5, Javascript and jQuery and such things, to make SL communicate with the web. My latest passion is 3D design. I really love the new mesh capabilities in SL.

Quan Lavender: Let's talk about MadPea, you are currently more involved in the creation process. What are you doing?
﻿
﻿Arduenn Schwartzman: That's a very big secret! There's a big secret project under development at MadPea now, and it's very new and spectacular. I'm building at the landing point of the new 'game', so it is supposed to make a pretty good first impression! The new MadPea project was an opportunity for me to learn to make mesh objects. It took me a few weeks watching tutorial videos and talking with people and LOTS of practice ;) But it really is satisfying. With mesh you can do stuff never seen before in SL. And mesh has been around for such a long time in other platforms and games as well, so I'm glad it made it here too. It's actually easier to make mesh than sculpties too, so you'll be seeing a lot more mesh from me in the future.

﻿﻿﻿﻿
Quan Lavender: Thank you Arduenn. Looks as if we can look forward to a great new game at MadPea!