The Key of Hope Hunt - Part One!

Fantasy Faire 2013 and Madpea Productions are proud to present the Key of Hope Hunt - Part One! 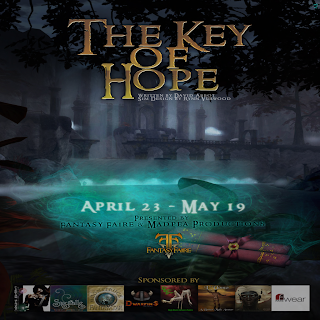 This magical adventure will send you exploring across the beautiful  Fairelands sims in search of precious ingredients needed to forge a talisman that will grant you safe passage into the Valley of Ish'Nar. Rewards await those that make the long journey!

Part One will run April 23 - April 28 only, so you must hurry and buy your HUD for 100L and start your adventure before it's too late! Part 2 is coming soon!

For a thousand years and more, the demon prince Val’baan ruled over the land with fear. Then, a child was born who would grow to be his nemesis. This had happened before, but Val’baan was possessed of enough brains to maintain an intelligence network that alerted him to possible threats before they were too great to crush.  This time, however, the girl was raised in secret by people ready for the time, and when she grew to womanhood the demon’s fate was inevitable. A quest, a battle, an overcoming followed, and the sun rose over the world once more. Kiana and her companions fought for three days to drive Val’baan first back into the valley, then to the temple which had been the seat of Val’baan’s power – his final redoubt. Two hundred men and women began that fight, ninety reached the entrance to the valley and only eight were alive to see Val’baan trapped as Kiana read from the scroll and completed the ritual of binding. Each of these took their place at one of the eight outer seals, with Kiana herself bringing them together in the center. The heroes’ strength was thus combined to forge a lock that could never be opened again, from within or without.

Fuzz the Unyielding,  who had stood with Kiana from almost the very beginning, held a secret – he was wounded. The Demon Prince’s ice-blade had caught him a glancing blow, so slight it went unnoticed in the chaos, and it festered within him. For all his purity of purpose and his resolve, the wound was enough corruption to weaken the Western seal that was his responsibility, and that weakness was taken by the ritual of binding into the great seal itself. The door was cracked, and Fuzz suddenly succumbed to his wound less than a day after the heroes finally parted to return to their homes.

The Bard Queen, however, could feel the darkness rising once again. She passed word to the kings of men and elves, and gave orders to her storytellers to ensure that all would know danger loomed once more.

“Find us our champions,” she said, “That we may remain safe another century. Call those of heart, and courage, and strength. Send to me those who would stand for what is right, and who do not fear the labor and the pain of that standing.

The call was raised, and those of such a stature answered. They came to the Fairelands, to the Junction, and set out upon their quest…
Posted by MadPea at 10:27 PM