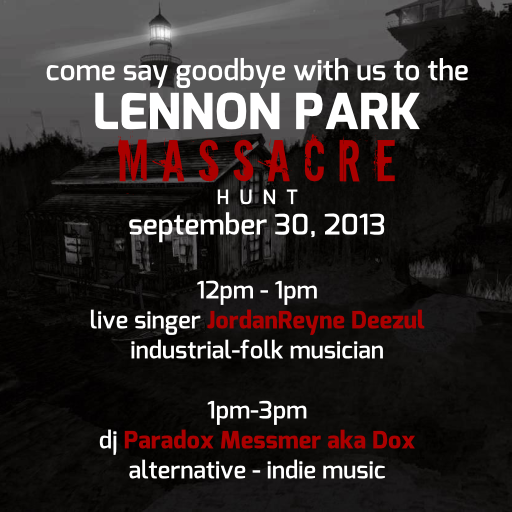 You came and investigated the mystery surrounding the deaths in Lennon Park.  You hiked the trails and searched everywhere.  You found the clues and pieced them all together.  You learned the truth of the massacre, it was a brave feat in itself.  Please join us, in celebrating the closing of the Lennon Park Massacre Hunt, September 30th, 2013.


Starting off for us, at 12 pm slt-1 pm slt, is the amazing live singer, Jordan Reyne Deezul and at 1pm slt-3pm slt, we will have DJ Paradox Messmer, playing Alternative Indie Music for you. 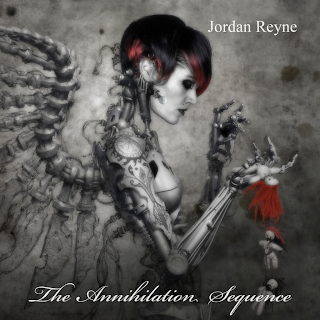 Jordan Reyne is a New Zealand dark electronic, and  folk noir musician.  She has released 5 CDs and is internationally known.  In 2011, she performed at the Glastonbury Festival.  In Secondlife, Jordan performs a mix of rhythmic grunge/folk/rock guitar, gutsy vocals and celtic melody.

To listen to Jordan Reyne:
www.youtube.com/jordanreyne

At 1 pm slt-3 pm slt we will have DJ Paradox Messmer aka DJ Dox, who has been DJing and Hosting since 2008.  He is the Owner of  SoundProof, which is a super eclectic underground, indie and alternative club for music geeks, goofballs, general outcasts and weirdos to find refuge and have silly fun. Dox is also a Secondlife fashion model.
This will be a party you don't wanna miss!  So mark your calendars and come on down and join us, as we say, "goodbye," to the Lennon Park Massacre Hunt.